I dont know what the fuck my problem is. For whatever reason, I’ve never posted the Bumble Bee story on my blogger. I have no clue why. Oh well. Anyway. “The Bumble Bee Story”, will now be referred to as The World “Famous Bumble Bee Story”. Why? Well, because I said so. Sounds like its great as it really is. Also because I’ve gotten all kinds of emails from people all over telling me about how they laugh and laugh at this story. I feel like I’ve done some kind of disserivce to my reading public or something by not posting this. Not really though, “a reading public,” might be putting too much on it. lol But none the less, I feel like I’ve half stepped.

WELL NO LONGER! I wrote this shit years ago, before blogging was invinted and you had to do everything by hand. Yes, I’ve actually been blogging since before before. 10 years lol. I just dont have all of them. They used to be on my Black Planet page back in the day. Before Myspace lol. I’ll give some of you time to wrap your head around that shit if you have to. In the mean time and inbetween time tho, a little back ground. Me, JD and Super Cuzz … our homie Adrion, who had a Blue blazer with a gray canvas top, chromed up with 18 inch Gold Daytons with 4 15 inch subs in the back. That shit was so fucking hard lol. So one day we are chilling at my house not doing shit. This nigga Adrion was like. “Nigga, I found this old ass blunt in my car, I thought I lost this shit months ago! I was high as fuck when I rolled it, and then I fuckin lost it. I was cleaning out my shit the other day. And I found it! Lets smoke this bitch!”

Me and this nigga JD was like COOL! We smoked that shit and was DONE! We were high as fuck. Somebody suggested we take a trip to HomeTown Buffet and just eat until we couldnt no more because we was so fucking high and hungry. Might as well. So then we got up and went to Home Town Buffet. We werent sitting down for more than 15 min when this shit happen. So we were still fresh and high as hell. Then…..

Our Story begins on 4.20.00, National get high day. The time, it was around dinner time. The setting, Home Town Buffet. The restaurant was full, and niggas was hungry. Who all was there? JD, Adrion and OJ ( me ). Midway through our meal, Adrion got up to get more food ( we was at a buffet ) as OJ sits and tears into some of what seemed like the best food ever, he notices a bit of uneasiness across the table on the part of his cousin JD. Wondering what in the fuck was going on, OJ takes a quick look around and notices that there is a guy in a Bumble Bee costume. Thinking more of his cousin, he says to his self “I know this nigga is not shook by this fuckin bumble bee over here” . OJ ask his cousin ” Nigga, what in the fuck is wrong with you?!? ”
JD answers in a very tense voice ” NIGGA DO YOU SEE THAT BIG ASS MONSTER OVER THERE!!!”
OJ replies ” Nigga? What monster? THAT BUMBLE BEE!?!?”
“NIGGA YES!!!” JD says with a strong hint of terror in his voice.

As the Bumble Bee makes his way through the isles of the restaurant and nears JD and OJ’s table, JD grows more and more nervous. At one point he even gave his self a small pep-talk to calm his nerves. All the while,  OJ sits across the table in absolute disbelief that his cousin could be so scared of some dude in a costume. What in the hell is a guy in a Bumble Bee costume doing in a buffet anyway? Well, apparently, the “mascot” for HomeTown Buffet is a Bumble Bee. I suppose his job is to bring joy to the children in the restaurant ( because there were plenty at dinner time … and its a family place i guess ). So this guy in a costume comes out every hour to say hi to the kids and sort of entertain and give out little goodies or whatever. Then all of a sudden, the Bumble Bee is now in the adjacent isle. So now JD has a monster prowling the isle’s and one very plotting OJ; with a cold ass – yet brilliant idea sitting right in front of him. However, JD is really only aware of the “Monster ass Bumble Bee.”

As the Bumble Bee makes his way down the isle OJ and JD are sitting, JD stares down nervously at his plate. Tossing his food around, not taking a bite. Just waiting.  As the seconds tick by, and the Bumble Bee steps closer and closer to OJ and JD’s table, the smell of FEAR has covered up any aroma of food that was in the air. Did OJ catch a wif of it? YOU BETTER DAMN BELIEVE IT!!! Is that a good thing? NOT FOR JD!!

How unfortunate that JD’s back was towards the Bumble Bee and he had no real idea of the exact location of this so called monster that had him very uneasy and making half assed attempts at taking a bite out of his dinner roll. I do believe JD was aware that he lost the exact location of the bumble bee and that made him way more nervous than he already was. How unfortunate for JD, he was too nervous to remember that OJ is going to look to take advantage of this situation, in respects to his delight, since he doesnt respect JD’s fear of this guy in a costume at all. How unfortunate for JD, he had no clue what he was truly in for. Maybe he was hoping to just tremble in fear hold his breath and wait for the Monster to pass.

As the Bumble Bee approaches OJ and JD’s table, the second it is by JD’s seat OJ jumps up in a flurry and shouts “HEY BUMBLE BEE!! HEY MR BUMBLE BEE!!!! COME TAKE A PICTURE WITH MY COUSIN!!!”
For absolutely NO REASON at all, OJ brought along his camera, not knowing what could possibly transpire. Furiously upset, JD lashes out at his then perceived evil bastard of a cousin “AHHHH SHIT!!?!?!?!?!?!?! FUCK YOU NIGGA!! THATS FUCKED UP!!!” 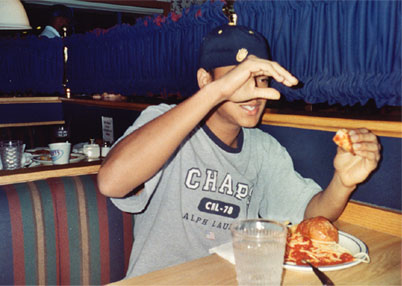 Pictured here is JD. Scared as shit, stuck as fuck, and with positively no where to go. Except for fucking nuts. Which he did with no hesitation at all. This picture was taken at the beginning of the insinuating TERROR that JD was about to endure. 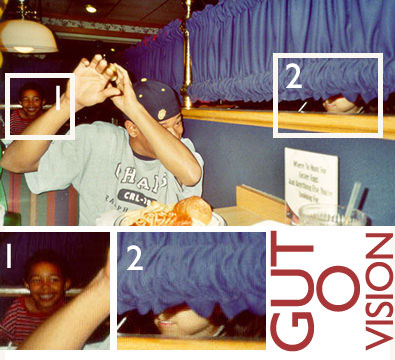 As JD proceeded to scream his ass off. More and more people started to notice. Pointed out in the picture to the left, and with the technology of “Gut-O-Vision”. Highlighted  you will notice two little kids laughin they ass off at JD’s vaginal behavior. However, these were not the only people whom where laughing as this nigga screaming because of his false fear for his life. There was a party of about 10 Asian foreigners next to us who also found the whole event overwhelmingly funny as hell. Mean while our petrified pal JD grows increasingly frustrated as he notices that no one is coming to his aid and his bastard of a no good son of a bitch cousin OJ is still pressing the Bumble Bee to take more pictures. But as JD continues to be terrorized, his frustration is quickly abandoned in exchange for plenty of TERROR and Helplessness. This is because the Bumble Bee is tryin to wedge it self into the seat with JD to… ummm… shit… i dunno. For the sake of the story, let’s just say the Bumble Bee is trying to “brighten JD’s day.” But, JD does not give a flying fuck. JD continues to loose his fucking mind because some how he thinks that “Mr. Muthafuckin Bumble Bee is trying to fucking Kill me.” So JD continues to yell and scream and plea for his young life. JD starts to yell out ” PLEASE GET THA FUCK AWAY FROM ME!!! I DO NOT FUCKING LIKE YOU!!! YOU FUCKIN SUCK!!! OH MY GOD!!! FUCK YOU GOTDAMMIT!!! OH GOD THIS SUCKS!! 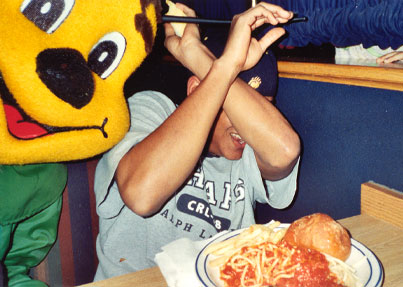 Here we finally get a glemps of the infamous Bumble Bee. And I know most of you are saying to your self. IS THAT IT?!?! Yes, my friends, that is it. The Bumble Bee JD is still cussing at with all he has to give.

And now JD is starting to draw a curious crowd. By this time the Bumble Bee is well aware of the situation and more than likely can smell the FEAR pouring out of JD’s pore’s. And if shit couldn’t get any more fucked up for JD, or any more funnier than it already was for OJ. The Bumble Bee, obviously on the same page as OJ starts to put on a show! 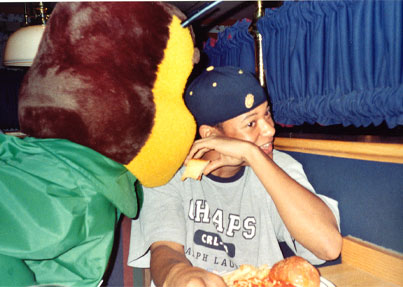 Is this JD laughing? Hell muthfuckin NO! That is the look of sheer terror on the face of a person that is too gotdamn high and too terrified for his own good.
Is that the bumble bee trying to soften the obviously shaken JD up by givin him a smooch? FUCK NO! according to JD at this moment the Bumble Bee was telling JD that he plans to kill his Black ass. And also how he was going to “suffer a horrible death.” ( cant forget that part lol )

We will never know the whole truth… even tho OJ was there, He says he was laughing his ass off gasping for air… “shit i didnt even see this shit happen i was bent over crying laughin with my hand in the air snaping pictures!” But whatever the turth is, its is painfully obvious that JD is on the brink of losing his fuckin mind.

But, forever frozen in time, we have the moment in which the Bumble Bee began to make sounds and really really SCARE tha shit out of poor, victimized, scared as fuck JD. I do believe shortly after this photograph was taken JD gave his final plea of mercy to his Asshole of a cousin OJ, asking desperately

Unfortunately for poor JD, OJ could not find the kindness in his heart to help his cousin in his time of need. Not only because he wanted to make light of JD’s fear, but was weakened with laughter by JD’s final plea for mercy. Regrettably this is the last picture OJ was able to snap, as he was over come by laughter and almost pissed on his self in front of everybody. Good thing he held it. Or we would have two muhfuckas to laugh at instead of just JD.

After a couple more seconds of fucking over JD’s day. The Bumble Bee continues on his way. And everybody, especially OJ, has had themselves a real good laugh at JD’s expense. Everyone returns to eating. JD is now super pissed off cusses OJ all the way the fuck out. All OJ can do is laugh which pisses JD off even more and now JD refuses to speak to OJ for the next five minutes. After their meal was done, they all left the restaurant and still laugh about the event to this day.

I LOVE that damn story.. Dude I remember when U first did the webpage for the bumble-bee-story. I dont think i’d laughed that hard in my whole damn life while I was reading that joint. Hill-ar-ious.

I LOVE that damn story.. Dude I remember when U first did the webpage for the bumble-bee-story. I dont think i’d laughed that hard in my whole damn life while I was reading that joint. Hill-ar-ious.