Paul Pierces Self Delusions of Grandeur

lol What? I wont go into the backwards logic this nigga clearly subscribes to. I just wanna know how he think he the best player in the world, and what gives that claim ANY validity.

Kobe had Shaq? Paul had Garrnett AND Ray Allen. A team with 3 allstars should win a championship. Ask the detriot pistons. And oh yea… The Lakers ntoo. Ask Kobe in fact how it is to play on a team with hella all stars and win a championship, he knows. But good for you anyway Paul.

Can paul score 81 points in a game? No. A game that your team was behind in at one point? No.

Paul, what was you over there doing while your team was wack? Not making the playoffs. IN THE EASTERN CONFERENCE! When Shaq left, Kobe was still making playoff appearances and making bids for MVP. After fucking ANTIONE WALKER and his wack ass left boston, the team couldnt even make the playoffs. With the self proclaimed best player in the world as the go to guy.

Speaking of MVP, how man times has paul been in the running, as a SERIOUS contender? Not more than Kobe.

Kobes team wasnt even suppose to make it TO the playoffs this year, and especially not the finals. What about yall paul? Yall have been a shoe in… SINCE you got KG. Who was up for MVP. Didnt hear your name come up all that often. Maybe a few times. But nobody was really serious about that bullshit.

Defense? 1st team? 2nd team? how many times? Paul? anything?

If radmonovitch was guarding Kobe in the finals. what do you think would have happen Paul? Right… I’ll let that horror show play in your head like we all watched happen for us foreal.

Way to not put any thought into that shit. Because clearly those things did no pop in that niggas head.

Somebody get this niggas brain a wheel chair or something. 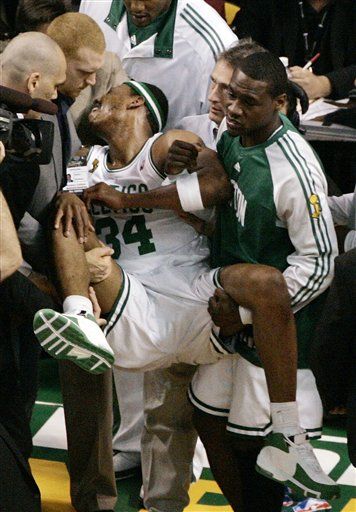 neither does scoring..Orlando woolridge led the league twice..

kobe only hit the playoffs ONCE without shaq who has went tot he finals now with EVERYTEAM he has been on..

lets not forget Boston was the main comp for det and ind for years..Pierce took his squad to the east finals a few times

lets stop saying ” the eastern conference” as if the west is 2nd to none..DETROIT..tapped las ass..MIAMI..tapped dalls after being down 3-1..Boston broke records on the lakers..and before this la/sa run chicago was buying their championship rings preseason faithfully…

karl malone one 2 out of the last 3 MVP’s when jordans was winning championships..was the best??..shaq i believe only has won 2 total..so does that mean duncan is 10 times better?

do i think hes the best..NO..but he has won at every level there is in basketball and has earned the right to say and feel whatever he wants..but those above arguements surely dont point at kobe being the best player in the league…if we going buy numbers it would be