It wasnt a Terrorist Fist Jab! It was a Fist Kiss!

Days, Weeks, Months and “Over Time Ago” Barack Obama and his “Good Bride” were said to be exchanging Terrorist pleasantries before one of his speeches. Photographed here: 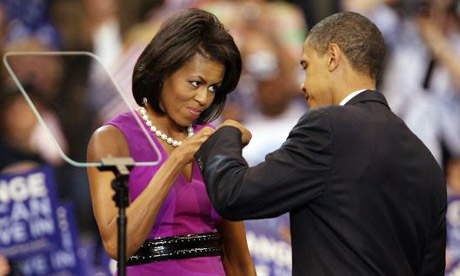 Recently the matter has been cleared up, by Shaq and Mike (somebody) an espn anchor in this simple demonstration.

So you see.. Barack… excuse me… President Obama and The First Lady where not showing each other terrorist love. It was a less creepy version of Al and Tipper Gore stage kiss. It was something every one could relate to. Because President Obama is a man of the people! He didnt want to creep us all out by slobbing down his wife and grabbing on her big ol round juicy ass. I say that with all the respect in the world. Im sure The President feels the same way, because Ive seen that nigga try and rub on it on stage LOL. He had to hold back, but he went as low as he could with out grabbing him a chunk. lol
Anyway, like I was saying. As you can see in the video, two things.

1. A white person said it was a “fist kiss” so that validates what it really must be. This is my logic, due to the fact that White People basically voted this man in office. And here we have a white person here trying to attempt the same exact action, which is clearly what most white people must call this action. Because previously it was regarded as a terrorist fist jab… But white people still voted him in office. So it clearly wasnt a terrorist fist jab. It was a Fist Kiss as explained.

2. White people should stop trying to rename “urban” hand gestures and actions. Why? well, the commercial should speak for its self lmao. shit was fucking Hilarious! “Nash! Gimmie a Fist Kiss!”

Shaq makes the best fucking espn commercials. Shaq, Lebron, Oden and Dwight Howard. They usually have the best ones.

its hard to get mad at white folks now adays..the Obama bucks and now this…they running out of material to even take their insults serious…its like when you were younger and someone made a song about you..OJ OJ the big phat OJ..knowing you was skinny as fuck lol lol