I decided to switch back to a PC, because the whole mac situation just irritated me (lol sorry, not really). And every pc ive ever put together, has run faster than any store bought mac Ive ever bought. Well, some years ago, for no good reason, one of my back up hard drives on my pc just fucking up and died on me. What was on that drive? All my music, and all my pictures. It was about 6 years of pictures on that hard drive. Some people may remember there used to be a photoblog on this site (which is coming back at some point.) all those photos, were lost. All the pictures I had planned to put on that photoblogger were lost. Alot of my memories, just gone. I still have the hard drive. And I plan on getting everything off that drive some day, one way or another. Which my shit died, I shed a few tears. Sigh, around that time, I dont know… I was going through so much, and my whole life was slowly falling apart all around me in damn near every aspect, and I couldnt do shit about it, no matter how hard I tried. This was just 1 more thing to the pot, that eventually led to me having a nervious fucking break down lol. (im not playing lol i really did have one for the most part)

Anyway, way back when, I named my Mac… Darth Uhmah. Because by coping the mac, I felt like I went to the dark side lol. But I was really loving the Mac, so fuck it. I named it after the ultimate representive of the Dark Side of the force. The Darth. Not Darth Vadar particularly, because if youre live like that, youre gonna get the title of Darth… Maul, Vadar, etc. LOL I take pride in naming my shit for whatever reason. I also used to have a hard drive named “Fredie Five Fingers”, “Dr. Orange” all kinds of shit. lol

So on with the story and the point of this post, kinda lol. Recently I switched over this site from using wordpress and a whole bunch of other free scripts around the net to just one simple Expression Engine install, which has been fucking great so far. I did have to break ALL of my gotdamn links, site and everything else. But eh, fuck it, who cares, I dont try to make any money off this site. Its really just for me to practice. Thats why alot of shit on this site never works lol. Because I use this site to fuck up on lol.

However, when I switched to Expresson Engine, I quickly found out, the default templates and the free templates are fucking awful lol. I was trying to get the fuck off my high and perfect horse, and I was just gonna let this site look any kinda way. And I did, I am proud of myself for letting it look like it did for as long as it did. Shit was rough lol. So after a while, and after my work load got a tad lighter. I decided to put together at least just a temporary sitaution that looked better than the last shit. Which this is.

So I was sitting around thinking of something that I would be OK with as a temporary solution, and I thought so myself… Why dont you use something old that you never put up? Which seemed like a great idea, except for I couldnt find any of my old artwork. Turns out, it was all on my old Darth Uhmah hard drive, that I had laid out to pasture because I havent used my G4 for years. So I fire up that bitch and low and behold, I found a bulk of all my old pictures! I swear, I shed a few tears. I can count on 1 hand the times I have cried tears of joy. This was one of them. There are still a ton of pictures that are still lost on that dead hard drive, but i found all the first pictures I ever took. Thousands. You talk about HELLA fuckin Happy? Man, Ive been going through most of them all day. I havent gotten shit done. lol.

So now lol, the site. Since I found ALL of my old artwork, that I havent seen in years. I figure, why not put it up? Might as well. There is a buncha shit I need to put on this site that Ive done over the years that have never seen the light of day. Want an example? Click here lol. Sigh, I think I might actually do something with that too some how some way…. one damn day lol.

About the background image, Uhmah Everywhere. I remember back in the day, a few graphic designers I knew, or knew of rather. Because still to this day, I dont know any of the people I started out with. I just know of them lol. So back in the day, a few graphic designers around the net took the logos from their site or some other design they did, and they would make stickers. They would make stickers and then paste them around their respective cities, take pictures and what not. I always thought it was pretty damn cool lol. I always wanted to do the same thing, but I didnt wanna pay for the fucking stickers, nor did I wanna be a biter. But I still wanted to do the same thing kinda. I also have this thing about me where Im SUPER competitive. So if Imma do something similar to somebody else, I have to 1 up them lol. So I thought it would be dope if I could get The Uhmah ( the moai with the afro lol ) on the side of a building or a truck or a bill board or something. Now, a nigga like myself would REALLY wasnt about to pay for that shit lol. And 1 upping these dudes wasnt all that serious to me, so I was like fuck it, Ill just practice my photoshopping by photoshopping the uhmah on the side of different shit. Turns out I only had time to do 1. This was it lol.

I was gonna touch it up and make it look better. The picture was taken with a 2 mp camera in like… 2002 I beleive. On the freeway lol. Syl and I were going some where. I didnt take this picture with the intent on using it for this. I just have a thing for Disel Trucks. That thing is Im actually scared of them shits. And when I say scared, I dont mean scared in the traditional sense. I just fear them shits on the road. My father used to drive an hour down the 10 both ways every day to work when I was younger, and he used to tell me all kinds of stories about 16 wheelers fucking people up, and almost fucking him up a bunch of times. So naturally when my Black ass started driving, I will RUN like a girl from a fucking Diesel truck on the road. Its hard to tell with the way I drive, but trust me. Im totally scared of them shits.

Speaking of old shit and trucks though, here goes more evidence to go against what I was JUST saying lol 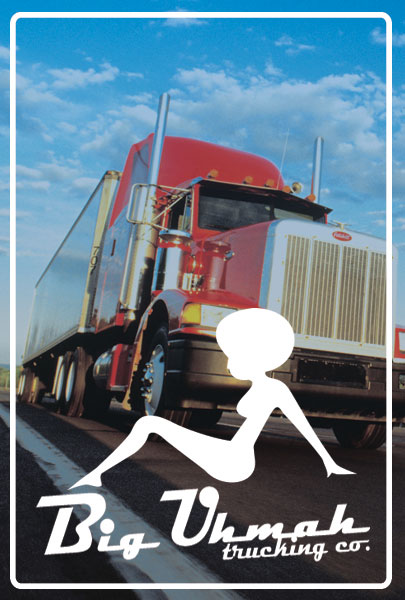 LOL No, I didnt take that picture, but I did make the girl with the fro lol.
I was gonna do a flash project called “The Big Uhmah Trucking Co.” to work on my flash skills, get some practice in, and to use a bunch of pictures I took of trucks. ( I used to have a bunch ). I think I made this graphic in 2002 too.

Ive been going through my old artwork all day too… LOL some of this old shit I did, I think is incrediably lame now… some of it is just bad. … and well never see the light of day lol.

So now this shit looks different, and I can sleep at night. LOL. This site is a constant work in motion, so if its fucked up. Then so what lol.